Though Hansa stole the show that night, I didn’t want to overlook our trip to Noble Beast Brewing Co.

Noble Beast is tucked away by itself, just northeast of downtown Cleveland. It’s a very open space; the brew works are right across from the bar, and there are plants hanging over the seating between the two. Is earthy industrial a thing? Because that’s kind of what this place is. 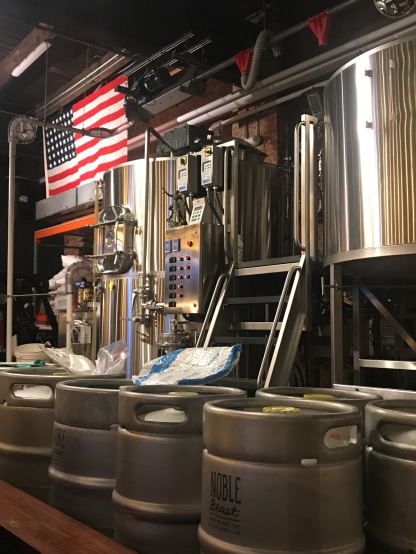 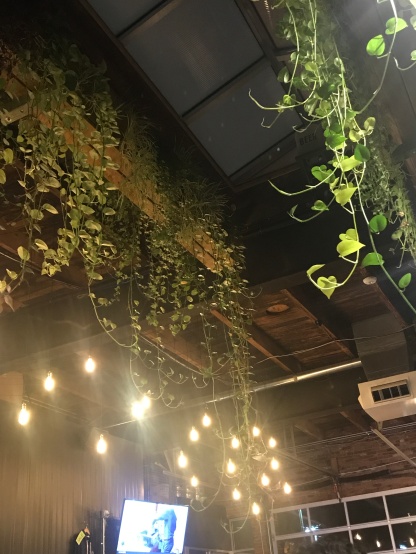 When you walk in, you seat yourself; there are picnic tables, high tops, bar stools, and low tops, though if they’re busy, you might be grabbing a beer and opting for standing room only while groups are finishing up. Then you order your food and beverages at the bar, and they bring it over from the open kitchen.

The beer at Noble Beast is pretty good. I tried out their Nitro Bitter, and English Bitter style beer; it definitely had some heavy hops flavor behind it, but it still had a relatively smooth finish– and not just because it was a nitro pour. 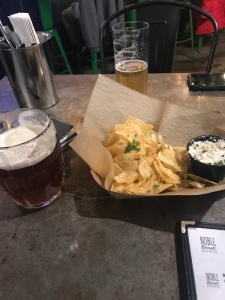 The food was something I had been looking forward to trying, as they had received many accolades from local travel publications. We had been there once before and gotten their nachos (which are a far cry from what you’ll usually get when you say “nachos”), but that was at the end of a night of… let’s say alcoholic indulgence, so I wanted to give their food a righteous try. We started with their chips and dip, which was definitely a highlight of the meal– creamy, sweet, and tangy beer infused caramelized onion dip with house-made potato chips.

For my dinner, I tried their soup of the day, which was a polenta soup with rosemary and smoked pork belly. I had never heard of such a thing, so I gave it a shot– and was not disappointed. There was a nice web of flavors that was both familiar and surprising; who woulda thunk 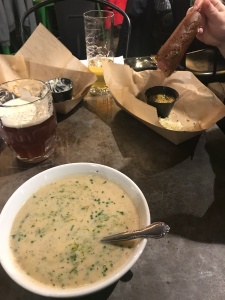 that rosemary and cheesy polenta would go together so well?

My other half got their Catchweight Kolsch for a nice light start to the night and paired it with their corndog (which was, in fact, a battered kielbasa). I was sorely tempted to try it, but it was gone before I could ask. Only after the fact did he mention that it had too much breading on it, which often tends to be the downfall of my favorite carnival food. But overall, it was a decent food and beverage experience.

If you’re up that way, maybe waiting for a Browns game to start or heading in to catch a flight at Burke Lakefront, stop in and grab a brew.