Ever since I was little, summer has meant baseball. Baseball on TV while making dinner, baseball on the radio while in the car or sitting on the porch, and watching and playing catch and baseball and softball whenever the weather was warm. Now, I’ve found someone to continue the tradition with. We spend many evenings at the ballpark and the game is always on– whether it’s the home team or not. So great is his love for baseball that he begged me to write this post. So, without further ado…

“From the corner of Carnegie and Ontario…”

The famous opening hook of Cleveland Indians radio play-by-play announcer Tom Hamilton; words that tell everyone on the shores of Lake Erie that baseball is on the way.  The line is a reference to the address of Progressive Field, home of the Cleveland Indians. 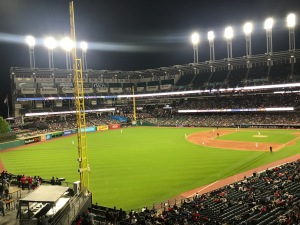 Opening in 1994 under the moniker Jacob’s Field after then-owner Dick Jacobs, this is the third stadium to house Cleveland’s boys of summer.  The first home of the Indians was League Park, a small edifice located in the Hough neighborhood near the intersection of East 66th Street and Lexington Avenue.  Cleveland Municipal Stadium, the second home for the Tribe, opened in 1932 and the team split time between the two stadiums for the next 15 years. When Bill Veeck purchased the ballclub in 1947, the Indians made Cleveland Municipal Stadium their permanent home.  But the 80,000 seat multi-team, all seasons facility proved too big for this football town’s little baseball club. It didn’t help that the aging facility didn’t meet the wants and desires of Browns’ owner Art Modell who pined for a stadium with more space for luxury boxes and modern amenities.  With that, the Gateway Project was born and property acquisition, demolition, and taxpayer funding campaigns began in 1985.

Modell was given the opportunity to be a part of the Gateway Project, the downtown sports revitalization plan that produced Gund Arena (now Rocket Mortgage Field House) and Jacobs Field (now Progressive Field).  The plan was to bring all three major sports teams to the same area. And while the Cavaliers, under then-owner Gordon Gund, were all too happy to leave the Richfield Coliseum behind, Modell ultimately passed on the deal and moved the team to Baltimore in 1995.  While devastating for many Cleveland sports fans, Modell’s quick cash grab created a perfect storm for a ball club on the verge of greatness.

From 1995 to 2000, the Indians at Jacobs Field went to the World Series twice (‘95 and ‘97) and won the Central Division each year (plus hosted an All-Star game in 1997).  In fact, the Indians started their string of 455 consecutive home game sellouts in June 1995, a streak which ended on the second game of the 2001 campaign. Basically, for five years, the Indians and Jacobs Field was a sell-out.  No football in Cleveland? No problem. A listless basketball team? Who cares! The Indians were the only game in town! 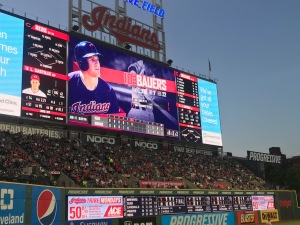 For my money, I’ve always considered the ballpark a gem.  It’s architecture and design qualities acknowledge the classic beauty of the single sport facilities of the past while maintaining the modern features and amenities that keep the younger generations coming back year after year.  Starting in the early 1990s with the construction of the Ballpark at Camden Yards, home to the Baltimore Orioles, baseball stadium designers began drawing up plans for stadiums with smaller seating capacities and design features that made fans think they were walking into the past to see today’s game.  Jacobs Field/Progressive Field follows in that vein. At its opening, the stadium seated 43,368. Today, after the major renovations of 2015 that moved the bullpens to a more visible spot in center field and the team ownership decided to close off much of the upper ring in right field, the stadium seats just 34,788.

The stadium is located on a corner lot with an adjacent parking deck that allows for easy accessibility while maintaining the physical boundaries of the city.  In short, it isn’t a stadium outside of the city with a giant parking lot around it. Neighboring teams in the region mimicked this layout including PNC Park in Pittsburgh, Comerica Park in Detroit, and The Great American Ballpark in Cincinnati.

Now for the really nerdy party (and the part that you’ll only find if you look back in team media guides from the late ‘90s)…the stadium is built with 490,000 bricks and 2.5 million concrete masonry units.  It took 64,000 cubic yards of concrete and over 11,000 tons of structural steel including seven million feet of rebar to construct the outer and inner shells.

The grass itself is comprised of Kentucky bluegrass blend that matches USGA standards and the field itself shows 105,000 square feet of sod.  Perforated drain lines sunk below the grassy surface every 20 feet across, plus two layers of pea gravel and a 12-inch layer of rootzone sand allow the grass to drain water at a rate of 12 inches per hour.  The warning track has a rubberized top surface that covers two layers of asphalt and angular road rock where the drainage rate is 23 inches per hour. These numbers are simply astounding.

But who cares about bricks and drainage?

Compared to the aforementioned stadiums, Progressive Field does a better job of integrating local food vendors and breweries into their promenade.  A walk through Progressive Field truly gives you a taste, or a sip, of Cleveland with vendors like Melt Bar & Grill, Sweet Moses, Momocho, Ohio City Burrito, the Great Lakes Brewing Company, and the Brew Kettle.

In 2015, the team underwent major stadium renovations–re-purposing much of the outfield upper level seating, moving the bullpens to a more fan accessible location in centerfield, refurbishing much of the right field district to offer a cleaner view of Heritage Park (the team’s own HoF space), and finally creating cheap SRO space near “The Corner” bar for more casual baseball fans.

For me, the Indians will always be my team and The Jake (not Progressive Field) will always be my stadium.  I’m not crazy that the team eliminated Chief Wahoo as their primary team logo in favor of the Block C. I don’t like that the current team owners, the Dolan family, have a tough time rubbing two nickels together to expand the payroll and they’ve taken to trading away assets to make the checks clear.  And I don’t really understand why this is still a football town when prior to the 2018-19 season, the Browns have done nothing to earn the respect of their fans while the Tribe has gone to the World Series three separate times.

But when Caelie and I spent an evening last week enjoying dinner, drinks, and fireworks at the Terrace Club, the in-house restaurant of Progressive Field that looks out over the third base seating areas, I could only think how lucky I was to be able to visit a facility in my own backyard where I could find new and wonderfully surprising amenities after coming to the same place to see the same team for 25 years.

Come to Progressive Field.  Watch the Indians. Or visit when your favorite team is in town– even if that team is the Yankees or the Red Sox; we’ll begrudgingly allow it.  It’s a beautiful game played in a beautiful space. And you owe to yourself to experience it in its summer glory.

See you at the game!