Long time no write! It’s been a rough few weeks

with the weather and work and just juggling things. But last week we managed to sneak in a nice romantic dinner at Cowell & Hubbard, nestled into Playhouse Square.

Cowell & Hubbard gets its name– and location– from a former jewelry store well-known in the Cleveland area. The restaurant held on to much of the class of a fine jewelry store and incorporated modern elements to bring it from the 19th century into the 21st. And if you’re looking for a more intimate type of ambiance, just pick a night when there’s a show and book a table after curtain. We got there at 7 pm, and our server, Jose,  was not kidding when he said it would be a totally different restaurant in 20 minutes; the hustle and bustle we walked in to walked out the door to head down Euclid to the theaters. 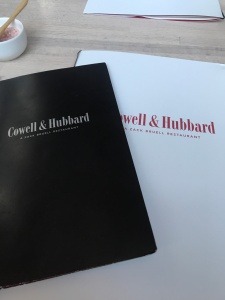 Though Zack Bruell— another famous Cleveland name– touts Cowell & Hubbard as a French restaurant, many of the flavor combinations are anything but. The spices often have a heady Asian flavor, which works well with both the delicate and hearty notes of French cuisine.

Though there was a special going on for Cleveland Restaurant Week, we decided to order off of their regular menu to really get a feel for the place. We started with

the escargot, a bold choice as neither of us had ever had snails before. Perhaps we still haven’t truly had them, as Jose advised these were far from traditional; so was his Looney Tunes tie, so I believe him. I think he said it was the shishito peppers, which are very earthy with just a hint of heat. Whatever it was, we were quite satisfied with the dish– I had expected it to be much slimier and chewier than it was, and I was glad to be wrong. The lemon–fennel butter sauce and chunks of hearty bread hiding in the bottom really helped to boost the flavor. 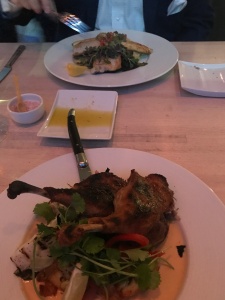 The Asian flair was certainly kicked up on my roasted duck legs. Bok choy and Thai red curry and two types of peppers spiced up the dark meat with leeks and potatoes. The duck itself was tender, though somewhat drier than expected in spots, but it still looked and tasted delicious. My other half ordered the quinoa-crusted trout, one of the more traditionally French items on the menu; he described the fish as, well, fish, but it was complimented well by the sides– blistered tomatoes, capers, Swiss chard, and Yukon Gold potatoes.

Dessert– my favorite part– was meringues with salted caramel ice cream. I was very tempted to try out the PB&J creme brulee, but I am very hard pressed to ever turn down salted caramel. As expected, it was very rich. But the meringues were delightfully crumbly and soaked up the ice cream perfectly. All of this paired quite well with an Argentinian Malbec (or at least the first two courses did; coffee sufficed for the last).

The prices were quite reasonable as well, with the whole meal coming to a bit over $100 with tip. If you’re looking for something nice without taking out a second mortgage, it’s a pretty good option compared to some other high-end restaurants in Cleveland.

Overall, I was very pleased with the experience. The space, the service, and the food all came together nicely for a great date night. I recommend giving it a try; either on its own or paired with a show, Cowell & Hubbard is sure to impress.

At this point in time, I'm exploring. I'm returning to things I've drifted away from, I'm starting to look at and improve myself, and I'm trying to figure out what it is this crazy universe has in store for me by learning and trying new things. The path I was on wasn't working, so I'm trying a newer, smaller, more challenging one. Join me. View All Posts

This site uses Akismet to reduce spam. Learn how your comment data is processed.