I have discovered a few things about myself recently. Rather, I’ve identified a fewthings that I’ve always sort of known, I just now know what to call them and have no difficulty acknowledging them. I guess that’s what’s supposed to happen in college, and life in general.

Yes, I’m fully aware this is not a word (English major, remember?). But it describes me perfectly. A combination of introvert and extrovert, it applies quite well to my personality. Sometimes, I crave the company of others and have the most fun in a crowd. These also seem to be times when I become energetic and talkative. Other times, I would much rather disappear into the woods and stand in awe of nature or curl up with a good book and a cup of chai tea. When this happens, I certainly am not conversational, and I may forget to eat. Books and rivers distract me from normal human functions like these. And of course these may overlap sometimes. That’s just how I operate.

And cue image of Steve Urkel. 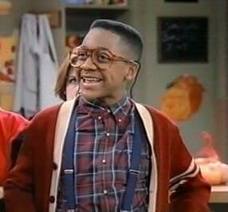 Alright not quite. But I know a little about a great deal of topics, and also quite an amount about a few specific areas. And I am very enthusiastic about all my knowledge, from the musical theater to German culture to wilderness survival. More than that, I’m always in want of more information. I enjoy learning, and I find a plethora of subjects fascinating. I think I was the only person actually intrigued by what our tour guide was saying when I went to Washington, D.C., in the eighth grade. Everyone else was fascinated by the black squirrels and cute boys getting off buses from around the country…

Everyone is human, regardless of skin color, religion, sexual orientation, socioeconomic status, or any other determinant that has been used as a basis for discrimination. For some reason, there are still people who haven’t figured out this simple fact. But I have. I live on a campus with a large GLBT (gay-lesbian-bisexual-transgender)-friendly community. And honestly, some of the nicest people and those I’ve become the closest friends with are gay. Who cares? I also know people who have a very strong belief in their religion, so strong that their entire life revolves around it. Great for them, even if I’m not interested in attending mass five times a week. I see no reason to base my entire opinion of a person on a difference in beliefs, therefore ruining any possible relationship I could develop with them. I believe that since everyone is human, they should be treated like a human. The Golden Rule comes into play here: “Treat others as you would like to be treated.”* It only makes sense. You’re human; they’re human. Why differentiate?

I’ve always known these things to be true about myself. I just wasn’t aware that I was aware of them, mostly because I didn’t have a name for this characteristics. And let’s face it, no one wants to be called a nerd. But I am, and I have no problem with it. It describes me well. So there’s a little more about me, for those of you who aren’t in a position to experience my… eccentricities. Don’t worry, there will be plenty more self-discovery as I go along. Why don’t you do a bit of your own?

What are some things you’ve discovered about yourself, either recently or a while in the past?

*There’s a down side to this philosophy. Treating others like crap will only lead to a return of crappy treatment. Ever seen what happens in that situation?

At this point in time, I'm exploring. I'm returning to things I've drifted away from, I'm starting to look at and improve myself, and I'm trying to figure out what it is this crazy universe has in store for me by learning and trying new things. The path I was on wasn't working, so I'm trying a newer, smaller, more challenging one. Join me. View All Posts

One thought on “And Along the Way, She Found…”

This site uses Akismet to reduce spam. Learn how your comment data is processed.